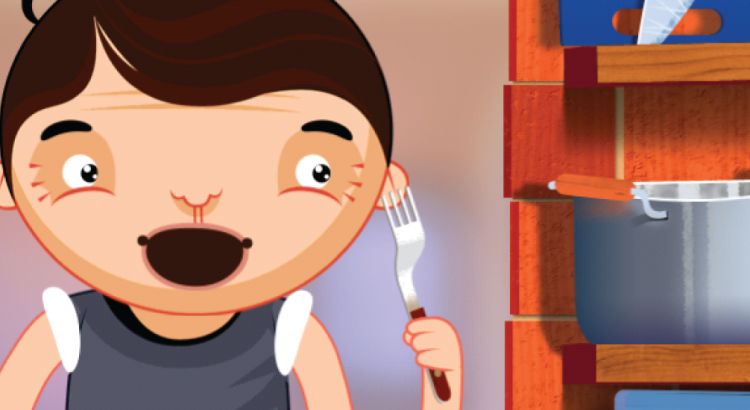 What I love most about Toca Kitchen is that it’s not a game. Toca Boca describes their apps as “digital toys,” and once you use Toca Kitchen you’ll understand what they mean. This app is perfect for setting up learning opportunities for your kiddos because there are no game elements – no timers, objectives, winning or losing. The app allows the user to discovery and play freely. The benefit of having such an open play style is that there are a lot of possibilities to work on generalizing skills that the child already has.

At the start of the app, the user is presented with a table of four characters, two humans, a cat, and a bull. After choosing a character, the user makes the character food picking from a large selection of ingredients that can be prepared in a variety of ways. Each character has different tastes and their reactions to the food express their preference, disgust or indifference. 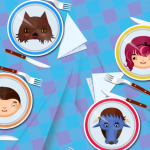 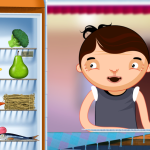 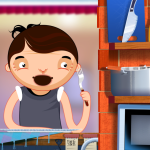 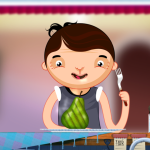 It is easy to work on inferring likes/dislikes, cause and effect, and preferences with this app. For starters, ask the child how the character feels after eating each food item based on the character’s reaction. For instance, if the cat makes a happy face after eating a boiled lemon you can ask, “Did the cat like it?” Once you’ve done a few of these, you can go back to the main screen and ask questions about the preferences of each character. You can ask which characters liked or disliked certain foods.

As you are working through these questions, there are always opportunities to vary your language to include categories, colors and negations. Instead of always naming the ingredient, try referring to the ingredient by its category and/or color. For instance, instead of saying, “broccoli,” you might say, “the green vegetable.” You can also work on negations by asking the child to pick an ingredient that is “not a fruit,” for example.

Selecting the ingredients is only part of the fun to be had with this app. The user also has loads of options to prepare the food (cut, blend, boil, fry, microwave, and more). This adds another layer to likes/dislikes as well as the option to target cause and effect skills. For example, one of the characters doesn’t like meat unless it is blended and cooked into a patty.

You can also work on knowing with your kiddo. While observing the reactions of the characters ask, “Did they like it/how do you know?” There isn’t a whole lot more to expand on here but it is a small opportunity to generalize this skill.

If you are working on following instructions with the child, you can chain a few steps together to carry out in the kitchen. You can ask the child to choose a specific ingredient and preform precise steps to prepare it.

Toca Kitchen provides a lot of opportunities for learning and as a bonus the reactions of the characters are pretty entertaining (especially the bull). There’s a parent section in the top left that provides basic information about the app. Toca Boca also makes an app called Kitchen Monsters that uses the same concepts but features monsters as the characters. That app is free but only available for iOS at this time.

Have you played Toca Kitchen? Let us know what you think in the comments below!

Available on: the App Store, Google Play, Windows, and Amazon

CJ worked as an ABA therapist for children with autism for 4 years before becoming the Creative Director at PixelAtion Labs. He has a master's degree in Special Education and Educational Technology and loves finding new ways to help kids learn.

Keep me in the loop!

Do you have an app you love?

Send us an email at appreview@pixelationlabs.com and we will take a look at the app and find all the ways to maximize learning opportunities.

The Benefits of Playing Toca Kitchen for Children with Autism 17 Sep , 2014

The Benefits of Minecraft for Children with Autism 24 Sep , 2014

5 Ways to Use Your Smartphone’s Camera to Create Learning Opportunities 19 Sep , 2014
Limit Time and Access on iPad Using One Easy Setting 26 Sep , 2014